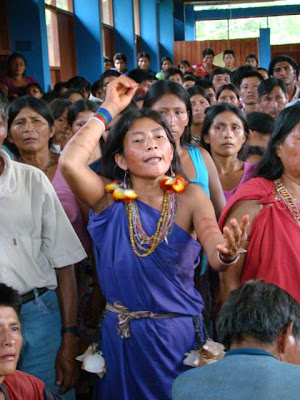 “Formerly, when animals were people, a giant crab, called Ugkaju, commanded an army composed of ants and fish that killed the strongest warriors, than were the tigers, vixens and birds as the paujil and the pava of the mount.
Ugkaju struck the water with its clamp forming floods that drowned the people. The warriors could not defeat it.
Finally, the weakest animal met to plan an attack. They were the armadillos and some small birds that make their nests in earth holes.
According to the plan, they were digging tunnels that arrived at the house of Ugkaju. The next time that the giant crab struck the water, the little animals opened the tunnels and all the water ran by them and he was in dry.
Then the paucar took its lance and killed him.”

Our war is a defensive one. Peruvian Company Aphrodite and its owner Dorato Resources Inc., the Canadian corporation which desires to exploit our natural resources without respecting our rights and our lives, says to their shareholders and to the public that Dorato “has excellent relationships with the local community”. Not only good but “excellent”... But from our place, we the Awajun and Wampis peoples have a totally different view.

The Peruvian Government is allowing mining exploration works in our territory with the intention of authorising exploitation activities, despite the area is ecologically vulnerable and contains several basin headwaters situated in the high mountainous areas, from which water resources descend and on which our Awajún and Wampís communities depend for their survival and physical and cultural reproduction. The situation is urgent and extremely serious, which threaten seriously, imminently and irreversibly our rights to life, to health, to ethnic identity and to free self-determination.

The official reports issued by the Peruvian Government actually reveal the extremely vulnerable ecological conditions of the territory, where the mining exploration activities are intended to continue, deepen and expand with the objective of exploiting an open pit. These activities, once commenced, even in their merely exploratory phase, would irreversibly impact the health of our communities, their sacred sites, which represent their ethnic and cultural identity, as well as our lives.

In the case of the indigenous territory of the Awajún and Wampís peoples, the incompatibility of extractive activities with the existence of these indigenous peoples is reasonably obvious, due to the highly vulnerable geographic and ecological characteristics of such territory (the area is part of a “Hotspot” of worldwide importance, see: “Our territory” and this conservationist site) that should dissuade against any and all large scale extractive activities.

Based on the statements made by the State through INRENA (National Institute for the Natural Resources) this area consists of:

“One of the most dynamic forests, reason for which it is also unstable and fragile when threatened by any physical or natural phenomena or the direct action of man” rendering it “necessary and essential for the Awajún population, living in the lower areas of the Cordillera del Cóndor, to intangibly preserve the upper areas thereof, in order to maintain their quality of life and cultural values.” (1)

Declaring the intangibility of the upper areas of the Cordillera del Cóndor is essential, as stated by INRENA, because their mountains serve as headwaters for the main tributaries of the Marañón Basin (Cenepa, Comaina, Campana Ravine, Achume River, etc.) and:


“Any activity carried out shall alter the water regime of the basin and affect the environmental flow, thus putting the conservation of biodiversity and the availability of resources for the lower areas of the Cordillera del Cóndor at risk.” (2)

In addition, this shall also seriously, irremediably and irreversibly affect the indigenous populations, already impacted by the mining exploration and exploitation activities.
Given the failure to recognize the ownership of indigenous land, local indigenous organizations, aware of the threat posed by extractive activities to such area, decided to request the State to classify the portion of land adjacent to the border, shared with the neighbouring country of Ecuador, as a Protected Natural Area with the intention of protecting, by means of environmental laws, the ecosystems and biodiversity thereof.

As a result of an extensive participatory process, which lasted approximately thirty months and was headed by INRENA, such entity proposed the “Ichigkat Muja - Cordillera del Cóndor National Park” with a total area of 152,873.76 hectares. However, this measure to protect indigenous territory was ultimately ignored without consulting the Awajún and Wampís peoples, which was the product of a process carried out in parallel with the discussions regarding the National Park: the pressure exerted by the private mining sector and the government on INRENA. 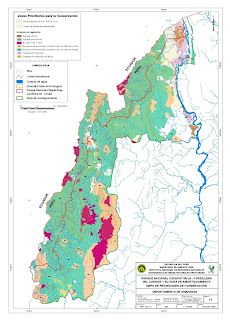 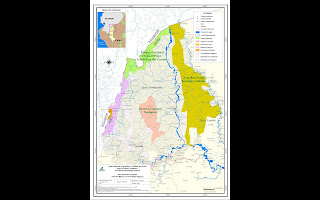 Left: proposal of National Park Ichigkat Muja agreed between INRENA and the indigenous communities after the correspondant scientific studies. Above: Final extension of the National Park which was reduced to favour the mining interests of Aphrodite and Dorato Resources Inc.


After the initial movements of INRENA to fullfill the agreement reached with the Awajuns and Wampis communities, a considerable number of mining claims overlapping with the reserved zone, either in whole or in part, which holders were individuals or legal entities with ties to the Canadian company, Dorato Resources Inc. and the Cardero Corporate Group, were immediately submitted to the Mining Concessions Bureau. Such mining claims required INRENA’s favourable opinion for their subsequent approval. Initially, this institution systematically issued opinions against the approval of such mining claims:


“…for the Awajún population living in the lower areas of the Cordillera del Cóndor, it is necessary and essential to intangibly preserve the upper areas thereof in order to maintain their quality of life and cultural values, reason for which they have been supporting the establishment of the Ichigkat Muja - Cordillera del Cóndor National Park.”

“…the impacts that could be generated as a result of the mining exploration and exploitation activity would directly affect the objectives to conserve the Santiago Comaina Reserved Zone.”(3)

But, although INRENA is aware of the extreme level of ecological and human vulnerability of the Cordillera del Cóndor and in spite of having continuously and categorically spoken out against performing extractive activities (as observed in the different dossiers regarding the awarding of rights to mining petitioners) (4), such entity strangely and surprisingly changed its position, adopting a favourable opinion without completely retracting any of its previous technical arguments. We will show how and why INRENA did it...

In the “Halcón 1” mining claim, for example, after recognizing that “mining claims overlap with a interconnecting system of ravines that form part of the headwaters of the Cenepa River, which could be impacted by the activity and could affect the native communities and population that use them, if their water is contaminated with the waste resulting from the activity”, INRENA favourably approved the proposal, concluding contradictory that “due to the characteristics and importance of the ecosystems overlapping with the mining claims, mercury and cyanide must be handled with special care, in strict accordance with applicable regulations.”(5)

INRENA indicated the following in another dossier, insofar as its initial opinion is concerned:


“The Lahaina 17 and Lahaina 20 mining claims, which are less than 1 kilometre from the Ichigkat Muja National Park, in addition to the Lahaina 1, Lahaina 2, Lahaina 3 and Lahaina 17 claims, which are less than 10 kilometres therefrom, are situated in its Buffer Zone, on a group of rivers that empty into the Cenepa River, continuing on into the Tuntanain Communal Reserve downstream; for this reason, the development of mining activities in such claims implies an increased probability of contamination. If we also take into consideration the year-round precipitations in this zone and the fact that the contaminants generated would be quickly carried away by water towards the Tuntanain Communal Reserve, we believe that it is advisable to issue an unfavourable opinion, given that the activities carried out in the Buffer Zone must not put compliance with the conservation objectives of the Protected Natural Area at risk.”(6)

However, in an example of extreme inconsistency, after adding a new argument advising against the mining activity in the area (“due to the constant and abundant precipitations during the entire year, which are typical of this area, and the steep terrain [greater than 50%] runoff, resulting from the rain, could transport contaminants generated by the mining activities towards the Tuntanain Communal Reserve, if an eventual mining exploitation activity is improperly managed”) and in spite of failing to retract any of its previous technical arguments, INRENA subsequently changed its position, adopting a “favourable opinion”, indicating that “due to the possibilities of contamination, it is necessary to perform a study in the environment of the buffer zones of both protected natural areas before proceeding to the exploration stage, in order to define the areas of risk and levels of incompatibility with the mining activities.” (7)

ODECOFROC has documented the process by means of which the mining company sought the intercession of MEM, the Joint Chiefs of Staff, the Ministry of Defense and the Ministry of Foreign Affairs in order to force INRENA to amend its technical opinion and issue a favorable one for the mining project. Various meetings were held by an intersectoral committee starting in July 2005 with the participation of Bedoya Torrico, manager of Afrodita, in order to define the border policy and the fate of the Ichigkat Muja National Park. During the last of these meetings held in November 2005, the participants demanded that INRENA “issue a favorable opinion” for the mining activity within a term of three days and “expressly declare the compatibility of the mining activity of Compañía Afrodita in the Cordillera del Cóndor” (see the shameful “agreement” of the meeting in the page 31 of the Report "A Chronicle of deception").

A few days later, Bedoya Torrico arrogantly requested the Head of INRENA in writing “to comply with the resolutions adopted in the meeting held on November 8, 2005” (letter dated October 22, 2005). This unacceptable political interference, which forced the technical opinion under INRENA’s sphere of competence to be amended, paid off in January 2006, when this body finally changed its initial position in favor of the interests of Afrodita.

INRENA still emphasized the need to subject these mining operations to a monitoring program and specific environmental requirements, since the Afrodita concessions granted before the creation of the Reserved Zone were located in an ecologically vulnerable area (until it was decided to declare it a National Park, the highest category of protection in the Peruvian system of protected areas).

Nevertheless, the gap had been forged. Six days later, the Ministry of Foreign Affairs responded, after more than a year, to the intersectorial consultation regarding the classification of the Reserved Zone, expressing its disapproval of the creation of the National Park in the area requested by Afrodita. Without detracting from the “solid environmental and ecological grounds” on which INRENA based its proposal to create the Park, the Ministry expressed its opposition, indicating that “by establishing an intangible area, future mining development would be prevented”.

Therefore, Compañía Minera Afrodita was able to recommence exploration activities, this time under an option agreement with Goldmarca Ltd., a Canadian enterprise that operated on the Ecuadorian side of the border in association with a company pertaining to the conglomerate of industries of the Ecuadorian Army (Ecuadorian Army Industry Bureau - DINE) and that could provide Afrodita with access from the north to the Cordillera del Cóndor. Meanwhile, Afrodita was operating from the campsite at the Tambo Surveillance Post of the Peruvian Army in Peru.

In summary, the Peruvian Government decided to explicitly and systematically favour extractive activities to the detriment of both the conservation of natural resources, as well as the rights to life and health of the indigenous populations that inhabit these areas, without providing any technical or legal arguments justifying its change in position regarding the compatibility of the mining activities with these ecologically vulnerable areas.